The Certificate of Recognition of CARICOM Skills Qualification programme facilitates the free movement of labour by CARICOM Skilled Nationals (CSNs) by allowing CSNs of participating CARICOM nations to move between nations to seek and pursue work opportunities without needing to obtain a work permit. The information below provides insight into the performance of this programme during the quarter, April – June 2022. We invite all readers to visit our website at www.bac.gov.bb to learn more about this programme and assess their eligibility to qualify as a CARICOM Skilled National. 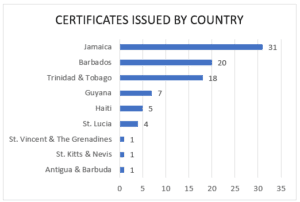 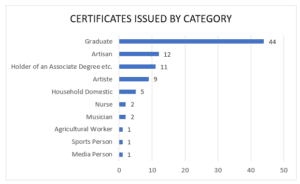 The largest number of the eighty-eight (88) Certificates issued were to those who applied under the Graduate category. No Certificates were issued to anyone under the categories Security Guard and Teacher. 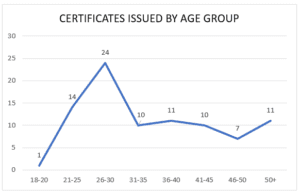 The highest number of the eighty-eight (88) Certificates issued were to recipients who fell between the ages of 26 & 30.

As the table above shows, there were significant declines in the demand for the Council’s recognition services during the April – June 2022 quarter, relative to the previous quarter. The highest number of applications were received for the Recognition of Institution and/or Programme service. It is through this service that applicants can have the recognition status of an institution and/or programme of their choice checked and investigated by the Council.

As the table above shows, there were three re-registrations conducted during the quarter. These services were facilitated for the Barbados Community College, Mel’s Exotic Nail School and Salon Inc., and Regional Security Systems.

To learn more about the BAC and its services, we invite you to visit our website at www.bac.gov.bb.

Answers (1) Intern (1) Questions (1) School (1) Value (1)
This website uses cookies to improve your experience. We'll assume you're ok with this, but you can opt-out if you wish. ACCEPT Read More
Manage consent

This website uses cookies to improve your experience while you navigate through the website. Out of these, the cookies that are categorized as necessary are stored on your browser as they are essential for the working of basic functionalities of the website. We also use third-party cookies that help us analyze and understand how you use this website. These cookies will be stored in your browser only with your consent. You also have the option to opt-out of these cookies. But opting out of some of these cookies may affect your browsing experience.
Necessary Always Enabled
Necessary cookies are absolutely essential for the website to function properly. This category only includes cookies that ensures basic functionalities and security features of the website. These cookies do not store any personal information.
Non-necessary
Any cookies that may not be particularly necessary for the website to function and is used specifically to collect user personal data via analytics, ads, other embedded contents are termed as non-necessary cookies. It is mandatory to procure user consent prior to running these cookies on your website.
SAVE & ACCEPT